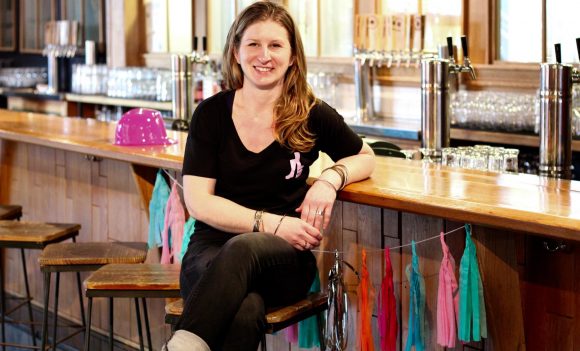 Women and beer: A brief history

Women and beer have a complicated history. Today, it’s natural to assume that beer brewing, packaging, and selling has been a male-dominated field since its inception, but did you know women were actually making beer in the very beginning, as early as the 18th century?

Until the industrialization of brewing beer, women participated in both the brewing and selling. But, gradually, this shifted. Women were typically restricted to only selling while men started making the product.

For women, the beer industry has changed immensely, and continues to do so.

Chatting about beer with Emily Engdahl

NitroBrew recently had the pleasure of chatting with Emily Engdahl, the Executive Director of the Pink Boots Society, which aims to “assist, inspire, and encourage women beer industry professionals to advance their career through education.”

The Pink Boots Society is comprised of brewers, packagers, designers, servers, writers, and more. They also offer scholarship opportunities to women in the beer industry.

We wanted to chat with Emily about the mission, past, present, and future of the Society, and the world of women in beer in general.

Everyone has their “gateway” into falling in love with drinking craft beer. For Emily, it was Ninkasi Brewing’s Tricerahops Double IPA. With a history of drinking Coors Light, Henry’s Private Reserve, and Moose Drool, she was completely blown away by everything else out there. She particularly notes Southern Tier Creme Brulee Stout—“I couldn’t believe it was beer.”

From there, she immersed herself into several beer-forward environments, eventually leading up to her very own educational beer programs (#pdxbeergeeks and Oregon Beer Country) in Oregon—a bucket-list destination for any craft beer fan.

She shared that her “overabundance of excitement and adoration for the industry” is what led to her Executive Director position with Pink Boots. She met the owner, Teri Fahrendorf, an award-winning master brewer, and immediately saw that her own background could boost Pink Boots into something truly special.

She recalls, “Eventually my day job took a back seat as I volunteered more and more for Pink Boots and took on more responsibility. I was hired on as the first Executive Director for Pink Boots Society.” And the rest, they say, is history. She says her absolute favorite part about her job is putting faces to the names of women she emails with, hearing how Pink Boots has impacted their lives.

Curious where the Pink Boots Society got its name? So were we!

Emily explains, “As Teri traveled, she began compiling a contact list of the Brewsters she met and called it the Pink Boots Society after the pink brewing boots she received as a gift from her mother in law and wore while guest-brewing along her journey.” The first Brewster she met was Stone Brewing’s Laura Ulrich.

Now, Pink Boots is certainly much more than pink boots. It is “the singular education association for professional women in the beer industry.” A one-of-a-kind organization, they are “the encouraging voice behind the entire beer family,” says Emily.

When it comes to women in the beer, Emily hopes we’ll get to a point where we won’t even need to have this conversation.

“Hopefully we can get to the point where no one says anymore ‘so what’s it like to be a female brewer?’ and instead we start talking about the qualities of beer, and the power of beer family, and the changes that we can create. I hope that the ways in which we can interact with one another and across different industries and values with beer in common help to bridge some of the tears in our culture’s fabric.”

And she hopes to see that shift herself! She says, “Ultimately I would like the conversation to change from women in beer to helping in beer, or quality in beer, or exciting new ideas in beer.”

Emily dreams of a culture in favor of female-led businesses, those who work for the betterment of our country. And she says, “the pendulum is beginning to swing” and that women will “just continue to rise!”

But, it’s important to consider just how and when change is going to happen. Not overnight. “I’m not naïve to the slow rate of change.” She does hope that “we can all help each other to aim for the tipping point where women and men can work together towards the bigger picture, safely and respectfully, no matter what the industry.” Judging by the growing prominence of women in all aspects of the beer industry, we are certainly getting there.

Emily has seen changes herself—just since working with Pink Boots! “It has grown more inclusive!” she says. “We are making strides!”

For any women reading this who wants to dip her feet into the beer industry, Emily encourages, “Forge on ahead! Manifest it!”

She admires that the women of Pink Boots truly embrace the meaning of ‘paying it forward’—not just through their scholarship program, but through “meetings, their friendships, the resource building, and the collaboration that happens.”

While thinking about all of this industry business, it’s important to have fun, too. We asked Emily about what she loves to drink.

Being in Oregon, Emily is surrounded by some world-renowned beer, namely DeGarde, one of the few spontaneous-fermentation breweries. And it just happens to be Emily’s favorite style of the moment, too. Though she says she’s gone through many phases, and still loves “a nice soft stout” on nitro, she is digging wild fermentation at the moment.

She embraces being able to try any new beer she can—“it’s a whole new world these days!” And her other sparkling drink of choice? Seltzer. “I drink obscene amounts of sparkling water,” she admits.

As much as she enjoys DeGarde, Emily notes her deserted-island brewery of choice would be Urban Family, another sour-focused brewery. She particularly loves their Tropic Heart, a mango sour. “You could probably live off that a few days if you needed to…”

So, there you have it! The future for women in beer is bright, and coming at us pretty quickly. Thanks to organizations like The Pink Boots Society and women like Emily Engdahl, women are embracing their passions in life and just going for it.

Emily said it best: “We only have one shot to repay humanity forward, so make sure that whatever you do, it’s something you are passionate about.”