What’s so Special about Nitro Beers?

What’s so Special about Nitro Beers? 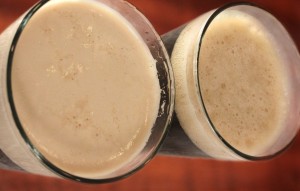 Nitrogenated beers taste great, feel wonderful on the tongue and look cool in the glass. But what is it about nitrogen, as opposed to carbon dioxide, that makes such a difference?

It’s all about the cruel tendency of big bubbles to eat little bubbles.

The nitrogen effect: Beer on the left is a NitroBrew’d version of the one to the right

In any liquid with some dissolved gas in it, the bigger bubbles draw the gas out of the liquid unto themselves.  Sucking up the dissolved gas, they grow ever bigger until they eventually burst.  The smaller bubbles on the other hand get squished in, dissolve and eventually disappear.  In other words, the bigger bubbles grow larger at the expense of the smaller bubbles. The physics of this process is called disproportionation.

Disproportionation works a lot more slowly with nitrogen. Nitrogen, unlike the carbon dioxide normally found in beer foam, is an inert gas.  Very little of it dissolves in liquid even at high pressures.  For example, at 35psi (imagine your car tire?) only about two tablespoons of nitrogen dissolves in the beer. Carbon dioxide is over fifty times more soluble than that! 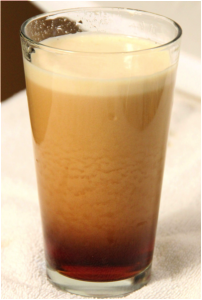 Furthermore, nitrogen does something very interesting in beer.  The gas comes out as a fine mist of bubbles. And they are bubbles of uniform size.  These fine uniform bubbles minimize disproportionation – meaning the foam lasts longer – and trigger carbon dioxide bubbles to form as well.  The net effect is a swarm of millions if not billions of tiny, stable bubbles in your glass of beer.  They are so tiny that they just move with the liquid currents like a fine mist and create a beautiful cascading presentation in the glass.  When the bubbles eventually eventually rise, they settle into a tight, creamy head of foam that still contains a lot of beer.

When you sip that beer, those bubbles roll on your palate, giving a pleasant silky-smooth mouthfeel.  Those bubbles also draw various flavors from the beer and present it to the palate for a very different taste perception.  Nitrogen will bring forth robust malt characters while mellowing out the harsher grainy characters.

The presentation of various flavors is also modified.  Flavors are released on the palate rather than straight up the nose as might happen with normally carbonated beers.  For example,  hop notes might show up more in the foam, but the beer washes down the palate cleanly, without leaving an aftertaste.  Aromatics, on the other hand, be they from hops, malt or yeast-derived, will be presented as a very enjoyable complex bouquet compared to the more in-your-face nose of a normally carbonated beer.

Think of these bubble physics the next time you have a NitroBrew’d beer.  Don’t forget to order the normal beer to compare and contrast!