Love the smooth, creamy mouthfeel of nitrogen beer?  You aren’t alone! It’s a trend with staying power and one that more and more restaurants are bringing to their menu. It’s also something that many consumers are looking to bring home with them. The popularity of nitrogen drinks has inspired many manufacturers to bring their own nitrogen beer systems to the market. But which one is right for you? Whether you are looking for a nitro beer tap system to install in a commercial setting or want to enjoy the taste at home, here is a guide to helping you find the set up that’s right for you. 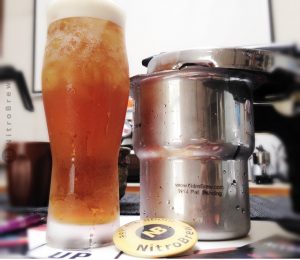 There is something pretty special about nitrogen-infused beer. It’s a beverage that really captures the senses. The first thing you’ll notice, though, are the visuals of it. Nitro beers are best poured into a stout glass, which allows the drinker to enjoy watching the bubbles cascade through the liquid. Then there is the way the beer feels in your mouth. Nitro beers taste smoother and creamier vs. a beer charged with Co2. The nitrogen creates a richer texture on the tongue and makes it a totally different drinking experience.

That’s why people love it and want to experience it again and again. The way the beer looks, smells, and tastes enhance the drinking experience. To achieve that, whether at home or for a pub or restaurant, you’ll need a nitro beer tap system.

There are a huge variety of systems to choose from, but in general, you’ll be able to choose between a kettle system and a keg system. Which system is right for you will depend on several factors. Those include how much nitro beer you expect to serve as well as whether you want to deal with consumables. The answers to those questions will help guide your purchasing decision.

Things to Consider Before Choosing a Nitro System for Beer

Determine how much nitrogen beer you’ll be serving.

It may be hard to anticipate how popular nitrogen beer is going to be initially. If you are a business, you may need to do some market research about nitrogen beer consumption in your area. It’s likely those numbers will surprise you. It’s a beverage that’s been gaining in popularity over the last ten years and doesn’t show signs of slowing down.

If you are a home user, consider your weekly consumption. You’ll also want to think about whether you’ll be using your nitro beer tap system for parties and gatherings.

If you choose a keg system, you may find yourself locked into the size. That might end up being too much (meaning your beer will eventually get stale). Or it could be too little (meaning you are going through the hassle of changing out and charging the new keg more often).

Kettle systems like the one NitroBrew uses offer scalability. That way you can simply expand the system as demand for nitro drinks grow.

Think about the long-term costs of different systems.

Depending on the system that you choose, you may need to consider the long term expenses and how they’ll affect your budget. All systems will need to be regularly cleaned to keep all the parts in good working order. Doing this should prevent any kind of blockage or break down in most nitrogen beer systems, so upkeep costs will be minimal on a high-quality system.

However, there are consumables to consider. Some systems are ready to go, right out of the box. Others will require you to use disposable nitrogen cartridges. These probably won’t blow your budget, but the cost does add up over time. Plus, you’ll need to make sure that you always have fresh nitrogen cartridges on hand. If you run out, that’s the end of the nitrogen beer until you get more.

Focus on quality over affordability.

When you are looking at nitrogen beer systems, it’s tempting to go with the option that’s the most affordable. Some people think that there is little difference between the systems so choosing the best deal is the smart way to shop. Unfortunately, if you end up buying a cheap nitrogen beer system, you could end up paying more in the long run. That’s because inexpensive parts make inexpensive systems, so the mechanics are more likely to wear out and break down over time. You’ll end up replacing your nitro system for beer more often. That means paying more in out-of-pocket costs than you would have if you’d initially invested in a quality set-up.

So before you try to save a few dollars, look at the quality of the systems you are considering. This is especially important in a pub or restaurant setting where you’ll be using the nitro system on a daily basis. Investing in quality will end up being more affordable.

The Pros and Cons of Different Nitrogen Beer Systems

NitroBrew covers all the bases. Our systems are easy to use, made with the highest-quality components, and deliver amazing nitro bubbles in every pint. You can browse our selection of top-quality nitrogen beer systems on our website and find the one that’s right for your home or business. They tick every box for both residential and commercial use. Get the creativity, quality, and mouthfeel you want as you pour the perfect pint every time. Order your nitro system for beer today.