It’s not only high-end coffee shops embracing the nitro coffee trend. Nitro coffee offers customers a totally different coffee drinking experience, from the visuals to the mouthfeel. Not to mention the fact that they can ditch the dairy without giving up a creamy texture. So while more coffee shop owners are bringing nitro brew on-board, there are also plenty of restaurants, pubs, and even convenience store owners looking for ways to keep nitro coffee on tap.

If you want to get in on the hottest trend in beverages, then you need to decide which commercial nitro cold brew machine is right for your business.

There are plenty of options out there. You’ll need to choose between kegerators and kettles, inline systems, and tabletop machines. But the choice doesn’t have to be a difficult one.

Here are some helpful tips for finding the right commercial nitro coffee machine for your business. We’ll also give you insight on some things you’ll want to watch out for to avoid nitro-related regret. 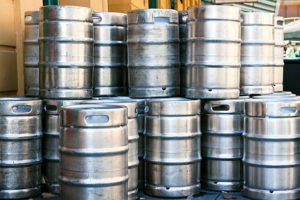 One of the solutions offered to business owners searching for commercial nitro cold brew machines is a kegerator system. Kegs can be an attractive option initially. They are inexpensive, hold a lot of cold brew, and are easy to install on-site. But they aren’t without drawbacks. The disadvantages of a kegerator should be carefully considered before investing your money.

The Problem Of Consumables

One of the biggest issues with a keg system is consumables. When you go the keg route, you’ll need to buy nitrogen tanks. Tanks aren’t cheap. Depending on how often you are serving nitro coffee (and hopefully that’s pretty often), you’ll need to buy replacement tanks on a regular basis. This is an issue for a couple of reasons. First, you’ll need to make sure that you have extra nitrogen tanks when you need them. The last thing you want is to run out of nitro coffee when demand is high. Second, it’s wasteful. Consumables increase your business’ carbon footprint, even if it’s something as simple as driving to refill your nitrogen tanks.

The cost of nitrogen tanks adds up over time, too. Nitro coffee is a beverage trend that isn’t going away anytime soon. If anything, the demand for this beverage is only getting stronger. That means you’ll be using your new commercial nitro coffee machine for years to come. So how much money will you be spending on tanks during that time? There is a good chance you’ll end up spending more money on a keg system than you would another commercial nitro coffee machine. It’s worth doing the math to see when and if you’ll come out ahead on costs.

Business owners know the easier something is to use, the more willing your team will be to use it. If nitro coffee is difficult to make or they dread replacing the tank when it runs out, then your team is going to be less likely to promote nitro coffee to your customers. If it’s an easy way to increase the day’s sales, then it becomes an easy upsell to everyone who walks through the door. Finding the easiest system to use will help you get the most out of your investment.

Which Commercial Nitro Coffee Machine Is Right For You?

So which commercial nitro coffee machine should you invest in? Here are three great options and why they may be right for your business. This system allows you to prepare and serve up to three nitro coffees at a time. That’s a great way to offer customized flavors to your customers, too, an added value that will have them coming back for more. The air compressor included with the system charges the kettle with nitrogen, so there are no consumables to replace, ever. Each beverage takes only minutes to prepare and is as easy as pressing a button to make.
Shop Now NitroBrew Commercial Bundle-16oz 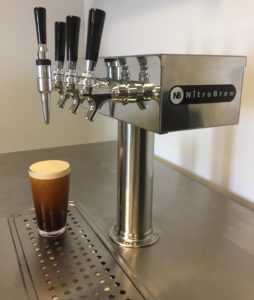 An inline system gives you the most options, really allowing you to customize for your space and needs. You can choose the number of taps that you want, mixing up your nitro and still cold brew taps as well. This system works with a keg, too, so if you already have a keg in place you can upgrade to the NitroBrew system. The bonus is you can use it either with or without nitrogen. Using it without nitrogen is the perfect solution to cut down on costs when you are serving the brew immediately. If you want to keep a large amount of cold brew on tap over a longer period of time, you can choose to use nitrogen gas to infuse your cold brew. Lots of different options make this a versatile solution for a commercial nitro machine.
Click here to book NitroBrew Inline System 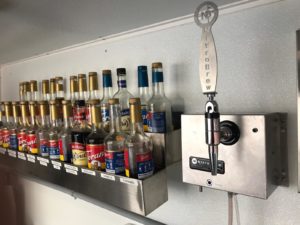 This tabletop system is an elegant commercial solution. It’s ideal for use in a restaurant as well as for special events and conferences. It’s even the perfect size for a food truck, opening up new revenue streams for your business. This is another system that can use either nitrogen gas or an air compressor to infuse the cold brew coffee. You can choose which option is best for your cash flow and your customers.
Shop Now Nitro Brew Tabletop

Still Not Sure About Your Commercial Nitro Coffee Machine Options?

Get in touch with us! We can help you unravel the world of commercial nitro cold brew machines and determine which one is right for your business. The right machine will depend on your projected sales volume, facility, and long-term goals for your nitro coffee business. Whether you have a high-end coffee shop or a convenience store on the corner, nitro coffee can be a great investment in your business’ future. We’ll help you find the right machine and teach you how to put it to work. Contact the NitroBrew team today to learn more about all our commercial nitro coffee solutions.