The Birth of a Beer Sommelier - Nitrobrew

The Birth of a Beer Sommelier

The Birth of a Beer Sommelier 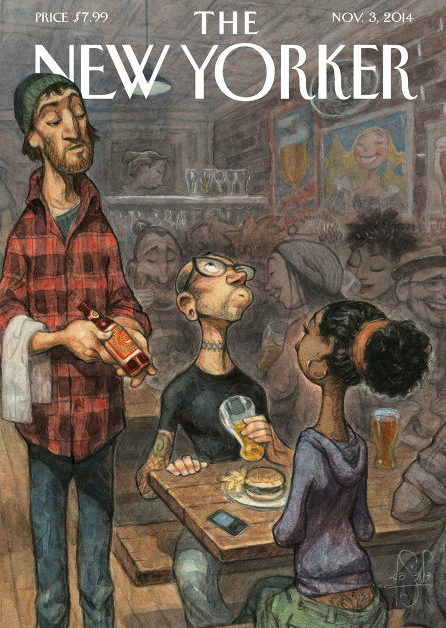 Water, barley, and hops – beer basics that are as true and steady now as they were when the Bavarians laid down Reinheitsgebot more than five centuries ago. In the right master brewers’ hands, those ingredients morph into that wonderful refreshment that still help monks meditate, and make modern connoisseurs salivate.

And indeed, it’s that kind of alchemy that’s making the craft world so amazing right now. Brewers are turning out beers that taste like breakfast in bottle. Feeling like dessert – maybe chocolate truffle, Key Lime pie, or strawberry shortcake? Yes – there’s a beer for that.

At international beer showdowns, judges almost have to suit up before they wade through hundreds of the most sophisticated, chemically dynamic potions to ever be tapped from a beer tank.

And at the awesome new brew house downtown that you’ve been dying to try for months, there you stand – staring up at that colossal chalkboard crammed with quadruple IPAs and nine different takes on the stout. Dazzled, awed, and maybe even a little scared.

It’s all getting very… complicated.

Think about that double espresso chocolate milk imperial porter you’ve been dreaming of reuniting with since last weekend. Or that other beer – the one your friend tries every month, and pressures you into drinking until you no longer can oblige. Very different beers, yes. But their roots – essentially Reinheitsgebot.

The variety and complexity of the flavor molecules in a beer are simply astounding. So, of course, even beers that have some similar taste qualities can leave very different lasting impressions on the palate.

Think about your typical lager. Light, crisp, clean and refreshing. In many ways, a good hefeweizen – though it’s an ale-style beer, not a lager – might carry some of those same qualities, and drinkers do occasionally mistake one for the other. But the banana and clove notes of a well-done hefeweizen – those are among its defining characteristics. Once you have had a great hef, you will never confuse it for another lager.

Although the basics of beer derive from barley, hops, water and yeast, a wide range of other ingredients have made it into recipes, too. Various spices and fruit (think Belgian styles) sweet additives (candied sugar, molasses), and sour  (such as lactic acid and Brett yeast) expand the definition of beer beyond what’s traditional.

Full-bodied, malt, toffee, and caramel, perhaps with a hint of hops – those are some of the qualities that describe nice full-bodied Scottish and amber ales . Coffee and chocolate – with perhaps some sweetness – are the tastes you might perceive in a nice stout. Similar attributes – with a hint of tartness – might remind you of a nice porter you have had on a particular evening with friends.

American style IPAs, crafted by today’s master brewers, are a class of their own. The variety of hops, bitterness, and aroma profiles is huge. Although some IPAs are disarmingly mild, you can’t mistake the big hop nose. In others, the high bitterness is what shines through. Striking a correct balance, giving just the right bitterness without a lingering aftertaste – that’s what sets a great master brewer apart from a good one. It is possible that once you try one of these “in your face” IPA, you may not be able to experience anything subtle. In a popular online beer forum, a drinker compared one of these almost painfully hoppy and bitter pales to “getting knifed in the palate by a blood-thirsty, sentient grapefruit. In a good way.”

When brewers come up with their fantastic recipes, the beer may have other distinguishing characteristics besides what could be the hallmark trait of that particular style (if you make beer at home, there are kits for brewing coffee and a donut into one big stout).

You don’t have to go to a class to understand and enjoy great beers. The next time you have one, just give your senses a few minutes to take note.

Especially your nose. Over 90% of all attributes of a beer are in the smell, especially if your beer is served in the right kind of glass. Before you sip some, smell it first. Maybe you can’t put your finger on it quite yet, but smell is so organic that over time you will be able to list all those flavors big and small that are leaping up at you.

Then take a sip. How does it feel in your mouth? Silky? Perhaps thick and creamy? Any bitterness or sweetness?  Salt, or spice? Some flavors and aromas present better on the palate with the warmth in the mouth volatilizing subtleties. Basically, some background flavors can leap to the front. Do you notice any newer notes?  Do any of the notes you smelled before come stronger?

Mentally make a note of those taste attributes, flavors and smells that seem new to you with each experience. Look for those interesting notes the next time you try something.  And share those observations with your friends.  Before you know it, people will look to you for suggestions. Another beer sommelier is born.

Did you know that NitroBrew carries its own line of flavors and essences for beer? Pick up a starter kit and check out what a little Himalayan cedar oil can do for an amber ale. Can you say, “tasting party?”